In a previous article Ж I referred to using iron and manganese oxide as if they were glazes.  This isn’t entirely correct, however, for the purposes of that article it was better not to muddy the waters with too much information regarding the differences between oxides and glazes.  That’s what this articles is for. 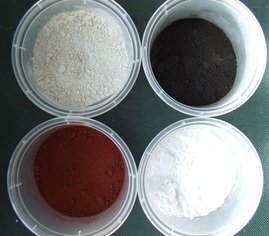 A collection of oxides and glaze ingredients
Simply put, glazes are recipes made up of various compounds, often with a high silica content.  Oxides, on the other hand, are a single compound derived from a particular mineral, often (although not always) metallic in nature. Ж
Oxides are frequently used as colourants within glaze recipes but equally can be used just as successfully on their own.  Without the silica content and other normal ingredients of a glaze, the oxide wash will result in a rough matt finish.  Some potters recommend adding a small amount of frit to minimise this if you find the dry texture undesirable.

As a general rule oxides are strong colourants and very little is needed to produce quite concentrated colours, so the process of using an oxide wash does vary somewhat from a typical glaze.  You will need to experiment with the ratio of oxide to water depending on how strong a colouration you want, but no matter what concentration or oxide type you’re using, it’s extremely important to stir the wash well and frequently to keep all the particles in suspension.  Oxides are generally quite heavy particles, after all, so they’re going to want to sink to the bottom fairly quickly.  And if you dip a piece of bisqueware into a wash that has been left to sit for a minute it will absorb mostly water, making it extremely difficult to get an even application of the oxide (short of drying out the piece thoroughly and trying again).

Once you have a decent coating, the catch-phrase for oxide washes is ‘Wipe back!’ because they do not naturally develop highlights and contrasts as glazes often do.  In the case of glazes, the glaze become molten (due to the silica or other similar ingredients) and recedes slightly from the high points, pooling in the low.  This forms deeper and stronger colours in the hollows while the raised areas have less glaze and colourant so will generally be significantly paler in colour.  In extreme cases, the glaze can run and drip from the piece onto the kiln shelf, fusing it there and ruining both the piece and your shelf – but I’ll deal more with that in the Basics of Firing article. Ж 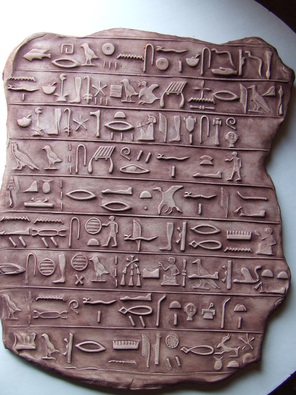 Oxides, in comparison, simply coat all surfaces relatively equally (with some exceptions), and do not undergo much movement within the firing process.  Therefore, simply dipped and fired, a piece will come out wholly one colour and it will be difficult to distinguish detail.  Wiping back will reduce the amount of oxide on the high points and simulate a similar effect of lightening them that occurs naturally with many glossy glazes (known as ‘breaking glazes’). Ж  You can control exactly how great or minor this contrast is by where you choose to wipe back and how thoroughly.

While oxides don’t have the silica content of a normal glaze, it’s still possible for the oxide coating to become molten and fuse to other pieces or the kiln shelf, so it’s advised that the base of the piece be wiped thoroughly.  Any oxide wiped off can be rinsed in a container and then reclaimed for later use, simply leave it to settle at the bottom overnight and then drain off the excess water.
As I mentioned above there are a few different factors that can affect the oxides coating a surface evenly.  These are similarly applicable for glazes.
The first is anything which affects the porous nature of the bisqueware.  The two main factors here are over-firing and water-resistant substances.  If your bisque firing is too hot the silica in the clay will begin to fuse together in a process called vitrification and become partially or wholly waterproof, which means the oxide wash will not be adequately absorbed into the piece.  This is why clays have a specific firing range for bisqueware that it’s best to stick to.  There is, unfortunately, no way to restore a piece that has been over-fired.  In cases like these your best option may be to paint the colourant on rather than attempting to use a dip glaze or oxide wash.
Secondly, the surface of the bisqued piece may become contaminated with a substance that inhibits the uptake of the water-based oxide wash.  The most common of these is oil, and it easy to unintentionally ‘decorate’ a piece with fingerprints if handling the bisqueware with oily hands.  Some potters intentionally use oil or heated wax to create areas where the glaze or oxide wash will not cover in a technique called ‘wax resist’.  It can create some interesting effects, but if it’s an unintentional result of contamination it can be quite unsightly.  Luckily, if you handle your bisqueware while eating greasy fish & chips, it’s not the end of the world.  Pop your pieces through another bisque firing and the oil will burn off, leaving them unblemished and ready to dip into an oxide wash. 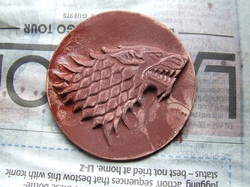 A clear fingermark to the lower right side where it was held
Of lesser consequence is the problem of touch-marks when dipping the piece in the oxide wash.  Generally speaking you’ll need to hold on to the piece while you submerge it in the wash (it’s not recommended to drop it in there as a thick layer of sediment settles quickly on the bottom and this will attach and coat your piece unevenly).  However, the points that are covered by your fingers will obviously not take up the oxide as cleanly as the rest of the surface.  There’s a number of ways around this.
Firstly, and most low-tech, some potters have large enough vats of oxide that they can drop the piece in and catch it before it hits the murky bottom.  There will still be some disparity from your fingers where you lift it out, but for many oxides it won’t be particularly noticeable, particularly if you’re wiping back.
Others will ‘paint’ a daub of the glaze or oxide in the area left clean by their finger – usually by dipping a finger in and touching it to the spot they were holding, making sure it’s the same thickness as the surrounding coating.  This is more relevant to glazes, however, which have a glutinous consistency and often coat up to 1mm thick. 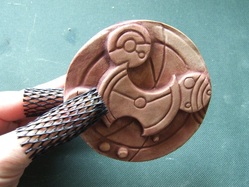 Thirdly, there’s equipment you can pick up relatively cheaply to help circumvent this problem.  The two most common are glazing tongs and finger sheathes.  Tongs work quite well for bulky pieces like mugs, but I personally wouldn’t recommend them for flat tiles, whereas finger sheathes can be used wherever you would use bare fingers.  They’re made from a synthetic material that’s ridged and designed to both hold your fingers off the clay surface as well as channeling in rivulets of the glaze or oxide wash to ‘repair’ the small section that they touch as soon as you release your grip.
Oxides are probably the easiest of all finishes to apply to a piece of pottery, being a simple mix of water with one component.  However, they can still cause grief if you don’t follow the basic guidance of keeping them well-stirred and wiping back the base and any areas you wish to highlight.
Before use, I would recommend you read my other articles on the range of colours you can achieve and also the inherent dangers in the different compounds. Ж
Ж - Related Articles