Glazes, Oxides and Underglazes -
the who, what and why of each

In previous articles I’ve mentioned glazes, oxides and underglazes all in the context of gloss firings Ж, but haven’t really gone into the nitty gritty of how they differ from each other.  While each of the above can be used singularly, and I will be treating them as such for the purposes of this article, it’s more common that potters will use a combination of two.  Generally speaking, oxides are used within glazes and glazes are used atop underglazes.  It’s not quite as common to find underglazes used with oxides, although it can produce interesting effects and is something I'm experimenting with.  Broadly speaking they all act to give colour and texture to a fired piece of pottery, but they may have different properties that will affect which one/s you choose to use.
With a little experience it’s very easy to tell glazes, oxides and underglazes apart simply by sight.  Glazes are most revered for the chemical reaction they undergo when heated, which can result in a wide range of mottled, blooming, crystalline or any number of impressive organic effects.  There are always exceptions to the rule, but glazes are usually characterised by their glassy appearance and gradients of colours.  Of course there are matt and uniformly coloured glazes, but individual potters lean towards the artistic and leave the plain glazes to the mass produced functionalware. 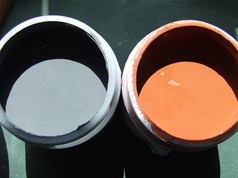 Two pre-made glazes. A strong blue and a brownish-blue, showing the difference in raw glazes to the finished colour.
When first applied, glazes are usually a translucent or fully opaque liquid that settles on the surface of the bisqueware quite firmly, although excessive rubbing will result in it dusting or crumbling off.  They vary greatly, but when unfired they are often of pastel colouration and can be significantly different from the expected colour after firing.  For ‘tried and true’ pre-made glazes bought from pottery stores there’s usually little in the way of surprises when it comes to the final colour, although there will certainly still be variation depending on the firing temperatures and conditions.  However, for those brave potters who create their own glazes from the ground up, it can be a long process of trial and error to find the exact colour effect that they want.  There is little indication of the final colour of a glaze before firing, as the mineral composition of a glaze is designed to react only at specific temperatures to produce the desired effect, which is in almost direct contrast to underglazes. 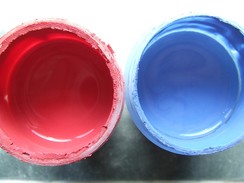 Blue and red underglazes. The fired glazes will be broadly similar, although kiln conditions may affect the brightness.
With underglazes, what you see is more or less what you get.  They are marketed as the paints of the ceramic world, and are often used as such – with pencils and paint brushes rather than the more common method of dipping glazes (although, of course, there are exceptions).  Underglazes contain colourants which are not affected by heat, or are affected only minimally.  As such, they’re widely used to paint scenes, pictures or words on to pottery.  Unlike glazes, there’s little to no running, merging or chemical reaction between the different underglazes when they overlap, beyond what would be expected from paint, so they appear as crisp, bright areas of colour.  They do, however, leave the clay with a matt finish that is tactilely unappealing and unsuitable for functionalware on account of its porosity (particularly if it’s earthenware instead of stoneware).  To remedy this, it’s common practice to coat underglazes with a transparent glaze that will seal the clay fully and give the surface a gloss or satin finish.
Underglazes have a broader application than glazes in that they can be applied while the clay is still in its raw, unfired state.  I have tested underglazes both on fired bisqueware and unfired greenware and have found the end product to be much the same.  However, I personally prefer working with bisqueware as it absorbs the moisture of the underglaze more readily and, I feel, is easier to apply and ensure a full coverage.  I personally had no problems in the kiln with firing underglazed pieces close together, even touching and stacked atop one another – which is in direct contrast to glazes which will fuse, fume or spit on other pieces nearby – but results may vary based on different brands.  I believe the likelihood of the pieces sticking together to be low, given the different mineral content to glazes, but there may be some danger of colours transferring either through touch or close proximity off-gassing.  As always, test on inconsequential pieces first if you have any concern. 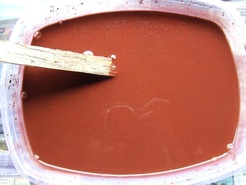 An iron oxide wash. The red iron oxide powder has been mixed with water at approximately a 1:10 ratio.
Oxides are a different matter again, and although they often form the main colourants of glazes, they can be used singularly in a limited fashion.  If used in this manner they’re called ‘washes’ rather than glazes, and are restricted to a single colour based on which mineral is used.  As far as I’m aware all oxide washes will result in a matt finish and the depth of colour will vary greatly depending on the mineral used and thickness of application.

I’ve spoken before about my love of iron oxide, mostly because it’s effective, non-toxic, and very hard to mess up.  Iron oxide is one of the most prevalent of the oxide-only washes and is easily recognisable from the range of rustic browns that it produces.  Other minerals may give green (copper), blue (cobalt), pink (tin), etc. but aren’t quite as popular either because of cost, volatility or toxicity. Ж  In final appearance, oxide washes fall somewhere between glazes and underglazes.  They have the organic nature and colour gradients (within a monochrome range) of a glaze, but the matt finish of an underglaze.  Generally they give less uniform coverage than either an underglaze or glaze, and can result in a piece appearing ‘washed out’, so aren’t as effective at detail as underglazes, and certainly wouldn’t have the colour range.  Their main benefit is that they’re much cheaper and give a more natural appearance.  As with underglazes, oxides can be covered with a transparent glaze to give a smoother finish, but at this point they start to be considered glazes and not oxide washes.
Choosing which of the above to use on your pottery can be a tough decision, as you have to take many things into account.

Do the colours compliment the piece?
Has the texture obscured anything?
Is it cost and/or time effective to apply?
Do you have the equipment to get the results you want (e.g. a gas kiln for reduction firings) or are there any inherent risks such as glazes running or oxide toxicity that need to be taken into account?

To aid your own decision-making, I’ll explain how I chose between glazes, oxides and underglazes with my own work: 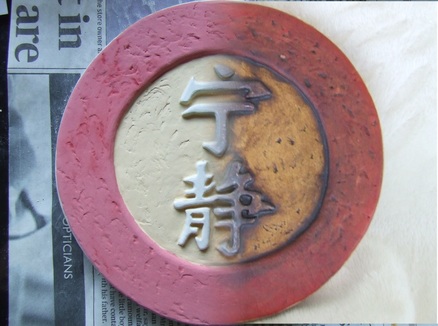 Two merged photos showing the raw underglaze and the fired piece which has an iron oxide and manganese dioxide wash applied on top.
To talk subjectively and with bias, I’m not a fan of heavily glossy and bright underglaze – that is, painted underglaze that has been coated with a transparent glassy glaze.  It’s wholly a matter of taste, but I find these pieces slightly jarring.  At the same time I concede that oxide washes alone can be quite plain and the texture is unappealing to many, even though they’re great for showing detail.  Glazes can look amazing but are thoroughly unsuitable for my own work, as the thick glossy coating would fill in the finer detail of my work and render it obsolete, so no luck there.

As a compromise I’m experimenting with underglazes covered with a pseudo-glaze of iron oxide and transparent gloss.  My plan is for this to tone down the bright colours of the underglaze while giving it a more organic, handmade look and a satin finish.  This way I’m able to preserve the detail of my carvings, have them display the colour they need to highlight and provide interest, and improve the texture to avoid the unfinished feel of rough clay.

It takes a little time to hand-paint and then dip-glaze everything, and some experimentation to get the ratios correct, but by understanding the properties and uses of the different types of finishes I can determine what will best suit my ceramic pieces.
Considering it will be a large part of a buyer’s first impression, it’s worth investing a little time and research into the decision.