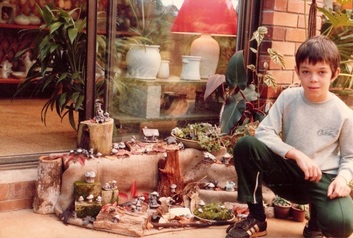 My brother and his exhibit of mushroom ornaments
I grew up with the traditional techniques of clay.  My mother was a potter and she taught me how to work with the clay, both throwing and modelling.  My siblings and I made little mushroom ornaments while my mother made the more intricate pieces – eventually I graduated to fairy castles which brought in a nice little income for a young-teen.

High school ended and university began, where I focused on archaeology and ancient history more to satisfy my lifelong interest than any real expectation that I might make a career out of it.  There wasn’t much call for a trained Egyptologist in Australia, after all.  I’d been looking up pictures of ancient carvings since I was a child, of course, but studying them properly really ignited my love of past cultures and a desire to recreate them. 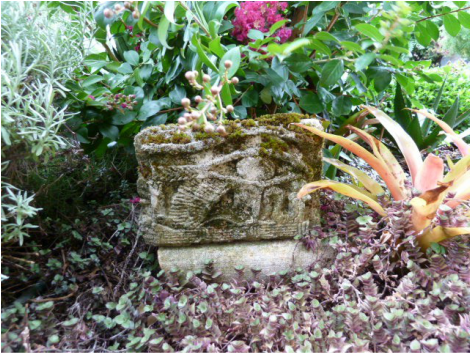 My first stone carving in soft limestone, now growing moss in my mother's garden.
I looked at clay and thought, ‘No’.  It wasn’t going to work.  Everything I’d learned about clay was additive: you built up the wet clay and moved it around till it was the shape you wanted it.  Well, it would never be the shape I wanted it because the details were too tiny and the edges too clean on all those old stone carvings.  I knew from all my years of working with it that you simply could not get that level of precision with clay; it always ended up looking too organic and rounded or too rough.  Even working with leatherhard clay as my mother occasionally did, carving out silhouettes in oil burners, you were constantly on a deadline and as soon as the clay was dry it was game over.

So I turned to stone instead.  I bought a rotary drill, various heavy-duty tips, and a bunch of different stone types to practice on, everything from crumbling limestone to a high-grade sandstone that was nearly as hard as marble.  I got results, of sorts, but it was slow and painful work.  As much as I was proud of some of the pieces, they were one-offs and I knew I could never make back enough money to make all my hours worthwhile. 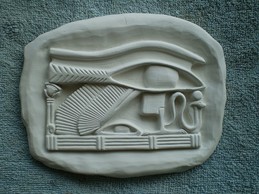 The raw clay version of the above stone carving, the 'Eye of Horus'
My father suggested I try it in clay, which I automatically rejected just as I had previously, but this time with some stonework practice under my belt it got me thinking about the clay in a different way.  It took me about half a year to come around to the idea and muddle my way through the details, but eventually I starting thinking of dry clay as the start of the process, not the end.  It was a paradigm shift that changed everything for me.

Dry clay, obviously, has completely different properties from wet clay Ж, and now that I’ve been working with it for over a decade I find I’m surprised more people haven’t caught on to it as a medium.  I guess we’re all so intent upon the idea that clay is a malleable material that we have to work with against the clock before it dries out.  That’s only the case if we think of it in terms of addition, of building up and moving it around, which is largely incompatible with the kind of detail you see in ancient stonework.  Looking at it from a subtractive point of view, dry clay suddenly bears more relation to soft stone, with the benefit of being able to make it more durable through firing once you’re happy with how it looks. Ж 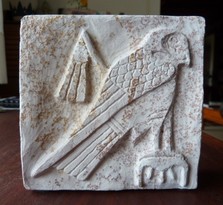 A test piece in iron-laced sandstone. Notice how the iron speckling interferes with the appearance.
“But it’s more brittle than stone to carve”     –     That just means you have to be a little more careful, and the softer nature is actually a boon for our tools, allowing most carving to be done with a simple knife rather than an expensive drill with attachments that quickly wear down. Ж

“But it’s not as ‘natural’ as stone, people prefer stone to clay”     –     Fired clay is far more natural and similar to stone than casting cement, which is often passed off as stone (usually called ‘cast stone’).  It has a much nicer look, feel and composition to casting cement, which is held together through a chemical process with the help of plasticizers.  It also doesn’t have the voids, mineral stratification, or conglomerates that would otherwise ruin a natural stone carving - see the example to the right.  Clay is lighter, cheaper, plus more versatile, with countless options of different oxides or glazes.

“One-off stone carvings are worth more than moulded clay copies because people want something unique”     –     Yes, they are.  Not just worth more, cost more.  A lot more.  The artist must charge for the full number hours of work that they put into the stone carving, which I happen to know from personal experience can be extreme.  Whereas with a clay version the time cost is approximately 1/10th of the original carving, if not less.  Each clay copy is handmade and unique in its own right, undergoing numerous processes that make it distinct from its siblings. 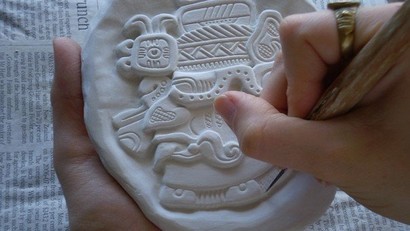 The techniques used to carve in clay using the subtractive technique are broadly similar to those used in stone carving, the primary difference is in the density of the material.  This means the results are likewise similar, allowing for crisp, sharp edges and fine detail of a sort that’s nigh impossible with wet clay.  It benefits from the advantages of both clay and stone while circumventing several of the shortcomings associated with either medium.