When looking up other potter’s work I’m struck by how many times the glaze isn’t, in my opinion, the best choice for the piece involved.  Certainly there are some fantastic potters out there that have a full understanding of the interactions between both clay and glaze, but many I see on Etsy in particular seem to choose glazes for colour alone and ignore all other features of the glaze.  To find a glaze that complements your piece the texture, thickness and transparency/opacity all need to be considered as just as important as the colour.

The most frequent mistake I see is potters using an inappropriate high-silica glaze on a heavily detailed piece.  Silica melts and runs during firing, giving a nice glossy finish but the flipside is that it usually pools in low areas and can almost completely obliterate fine detail. Ж

If I’ve gone to all the trouble of carving detail I don’t want it to be buried underneath a glaze, no matter how nice the colour.  I want the glaze to lift it out, emphasise the work I’ve done and complement it – not obscure it.  Otherwise I needn’t bother putting as much work into the carvings as I do.
Wiping back is key with iron oxide.  A little goes a long way, so after dipping the bisqued piece in a well stirred solution of iron oxide and water, you’ll want to grab a damp sponge and wipe over the surface.  It’ll take a bit of practice and testing to take off just enough to get the effect you want but not so much that it exposes too much bare clay, but after a while it’ll be simple to judge by eye the correct amount. ﻿Ж﻿
If you prefer a little more colour this can be achieved with underglazes, although these are significantly more expensive and necessitate a little more hands-on work.  Underglazes are colour pigments that withstand the high temperatures of a kiln (though check what temperature they’ll go up to before using, because some are known to burn out at around cone 10) and don’t react chemically in the same way that glazes can.  In other words, what you see is pretty much what you’ll get.  I've found the Amaco Velvet range to be particularly good. 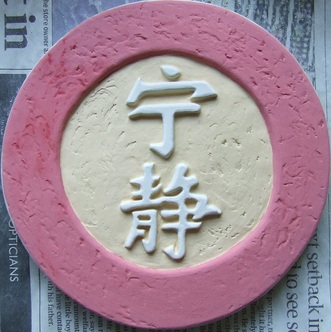 Unfired underglaze on greenware
These can be painted (or sprayed, sponged, etc.) on either greenware or bisqueware and then covered by a glaze before the gloss firing.  Many people like to paint a piece entirely in underglaze and then cover it with a transparent gloss glaze to give it a smooth finish.  Personally, I feel this risks making the piece a little garish so I prefer to use the underglaze sparingly beneath the iron/manganese oxide as an impression of colour rather than a bold statement.  Keep in mind that many underglazes need a couple of layers to get a strong colour, and without this they can look wishy-washy or show brush marks.
Rub’n’Buff wax is metallic powder suspended in carnauba wax that, once applied, provides a nearly permanent lustre that increases its sheen when buffed.  It serves as a highlight and gilding, and unlike paint, won’t peel off glossy surfaces.  A little bit of silver or gold embossing can do wonders to lift a design and catch the eye.

I intend to branch out into coloured glazes and have bought materials for four types:  A dark forest green, a midnight navy blue, a black that fades to chocolate brown and a paler brown with light blue highlights.

I will post more about these when I’ve had the chance to test them and produce consistent results.
Ж - Related Articles