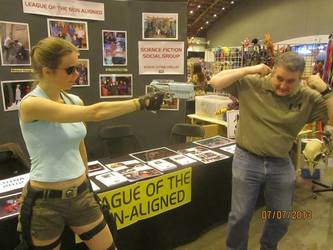 This is me when I'm not playing with clay.
Photo credit... err... one of my friends. :)
While at the London Film and Comic Con I was asked to make a piece for the upcoming ‘Can’t Stop the Serenity’ charity event, hosted by the League of the Non-Aligned science fiction social group.

At that stage I was very hesitant to take on commissions simply because I was still working full time hours at my office job and couldn’t guarantee it would be done within a reasonable length of time.  But with the event three months away and a bisque firing planned, I decided to try and slip it into the next kiln load.

I rolled out the clay to about 1.5cm thickness, which is thicker than I like to use on pieces that I sell, but given that this was a commission of an original piece there wasn’t much choice.  Original carvings must be made from my smooth-bodied stoneware clay which has a tendency to warp and split if too thin.  I much prefer to use paperclay for anything that will be sold as it’s significantly more stable and can be taken down to a third of that thickness without problem, but the presence of the fibres in it make detailed carving impossible.  (Refer to the Choosing clays article for more information Ж)
To make the perfect circle I simply used a cookie cutter, although I do find that wet clay tends to stick badly to metal and the last thing you want to do is to bend the clay when trying to get it out of the cookie cutter (see my article on Clay memory Ж).  So I’ve found the best way of dealing with this is to leave it for a little while to dry slightly and release its grip on the metal, and then ease it out using something wide and flat that puts even pressure on the whole piece. 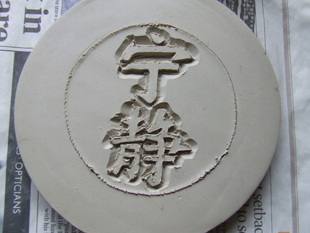 Before it could dry too much more I had to impress the Serenity logo design on the surface, which was done very quickly given the simplicity of the design.  Ordinarily at that point I’d leave the piece for a couple of hours, depending on relative heat and humidity, until it was leather hard and I could remove the bulk of the background.  This wasn’t possible in this instance, however, due to other commitments, so I had to employ a work-around to keep the piece from drying out.

If you ever have to do the same, simply find an airtight container, line it with paper that you’ve dampened (a couple of sprays from a mister is usually sufficient, you don’t want it sodden and falling to pieces) and put the piece carefully inside.  If the container’s truly airtight it should keep the clay moist and pliable for a decent amount of time, although you may need to add a couple of sprays of water every couple of days.  Try to avoid spraying directly on the piece as this can cause issues. Ж 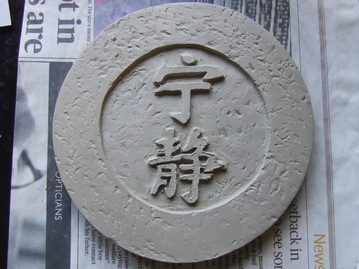 I could then tackle it at my leisure a few days later, drying it out to the ideal leather hard stage before setting upon it with knives.  There wasn’t much background to remove so it was quite a quick job, however, I had decided that I wanted to create the ‘old and battered’ look through the use of texture on the surface, so I had to ensure the background was smooth before it dried completely – usually a job I leave for when it’s bone dry as it’s easier to work with at that point.  I created the textured look by using a (possibly) ancient fragment of pottery I dug up in my yard a while back, when I had enough time to garden.  The broken edge gives a nice rough imprint so it became an impromptu stamp.  I made these impressions slightly deeper than I expected them to appear in the final piece to compensate for the underglaze that I would be painting on, as I wanted a nice strong colour and that would require a few coats.
Stylistically, I chose to sink the inner circle and leave the outer circle at the same height as the inner Chinese characters.  I wanted to avoid a centre-heavy pyramidical design as I felt it didn’t suit the character of the logo, it being essentially a flat device.  By sinking the inner circle I could give it some sense of 3D-ness without interfering with the emblematic feel and also use the geography to my advantage when it came time to glaze.﻿

See the 'Can't Stop the Serenity' piece made in under a minute: